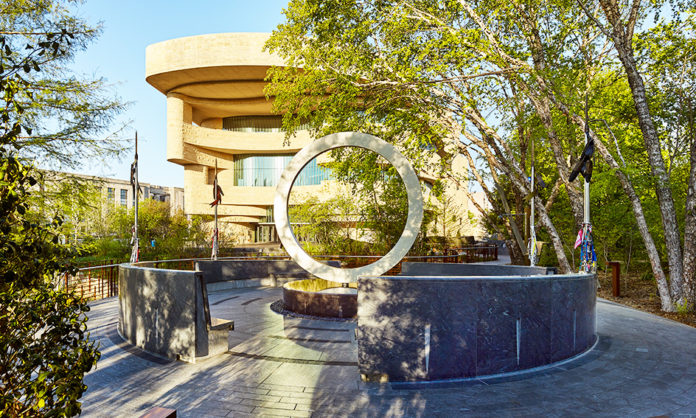 WASHINGTON, D.C. – The Smithsonian’s National Museum of the American Indian recently announced that Federated Indians of Graton Rancheria have donated $1.5 million to the National Native American Veterans Memorial. The gift – the largest to the project to date – completes the $15 million fundraising goal for the construction of the memorial.

The memorial, which is currently open at the museum, will be formally dedicated Nov. 11, 2022. The museum will host a ceremony and Native veterans’ procession, along with a weekend of activities, to mark the occasion.

The National Native American Veterans Memorial sits on the grounds of the museum and was commissioned by Congress to give “all Americans the opportunity to learn of the proud and courageous tradition of service of Native Americans in the Armed Forces of the United States.” Native Americans have served in every major military conflict in the U.S. since the American Revolution. This is the first national landmark in Washington, D.C., to focus on the contributions of American Indians, Alaska Natives and Native Hawaiians who have served in the military. The memorial design is by Harvey Pratt (Cheyenne and Arapaho Tribes of Oklahoma), a multimedia artist, retired forensic artist and Marine Corps Vietnam veteran.

“We are incredibly grateful to Federated Indians of Graton Rancheria for their generous support of the National Native American Veterans Memorial,” said Machel Monenerkit, Acting Director of the museum. “Gifts like this have enabled the museum to create a memorial that will serve as a lasting reminder of the service and sacrifice of Native Veterans and their families.”

“Federated Indians of Graton Rancheria are proud and happy to be able to donate $1.5 million to the National Native American Veterans Memorial,” said Chairman Greg Sarris. “This gift reinforces our strong commitment to honor the many American Indian, Alaska Native and Native Hawaiian veterans who have served this country in the armed forces.”

Federated Indians of Graton Rancheria join six other tribes and organizations in the Leadership Circle of donors for the memorial. The others are Cheyenne and Arapaho Tribes, the Chickasaw Nation, Margaret A. Cargill Philanthropies, Poarch Band of Creek Indians, San Manuel Band of Mission Indians and Shakopee Mdewakanton Sioux Community. The memorial has also been widely supported by tribal governments and tribal veterans organizations, as well as by individuals, corporations, foundations and other organizations.

With the completion of fundraising for construction, the museum will continue to raise monies for an endowment for the memorial. The $5 million endowment will ensure the memorial’s continued upkeep and provide funds for ongoing programming, interpretation and events about Native American veterans.