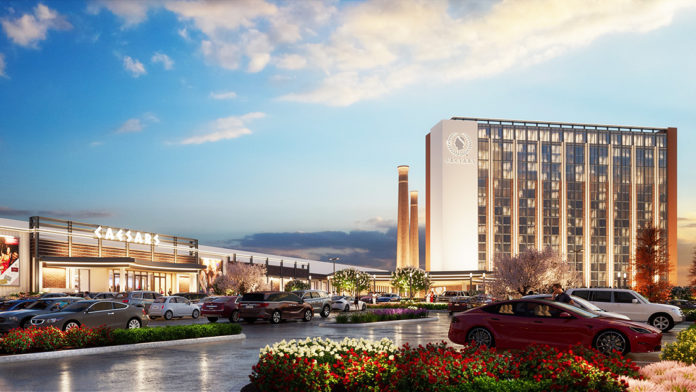 DANVILLE, VA – The Eastern Band of Cherokee Indians (EBCI) and Caesars Entertainment, Inc. have announced their partnership in the development of Caesars Virginia, which officially breaks ground in Danville this week. The $650 million project will be a tourism engine and economic driver for Danville and the broader region. The full-service entertainment facility will create thousands of construction and operational jobs and is scheduled to open in late 2024.

Caesars Virginia will include a 500-room hotel and a world-class casino gaming floor with over 1,300 slots, 85 live table games, 24 electronic table games, a WSOP poker room and a Caesars Sportsbook. In addition, the resort will feature a full-service spa, pool, bars and restaurants, a 2,500-seat state-of-the-art live entertainment theater and 40,000 sq. ft. of meeting and convention space.

Caesars, the largest domestic casino-entertainment company with more than 50 owned and managed properties, will serve as the manager of the casino. Caesars, EBCI and a local minority investor will be partners in the joint venture.

Upon its completion in 2024, Caesars Virginia will attract visitation from new customers and existing members of Caesars Rewards player loyalty program who reside in the broader Danville region and across the country.

“This venture is a vital opportunity for our nation and our people,” said Richard Sneed, Principal Chief of the Eastern Band of Cherokee Indians. “We are excited to be expanding our longstanding and successful partnership with Caesars Entertainment to develop a first-class resort that will be defined by luxury and service that Caesars’ guests have known and come to expect.”

“We are excited to build a world-class Caesars resort in Danville with the Eastern Band of Cherokee Indians, a valued partner of Caesars Entertainment for more than 20 years,” said Anthony Carano, President and Chief Operating Officer for Caesars Entertainment. “Caesars’ diverse collection of destinations across the U.S. is synonymous with unparalleled service, impressive benefits through our Caesars Rewards loyalty program, superstar entertainment talent and culinary excellence. We will bring these same phenomenal offerings to the Danville region for people to enjoy.”