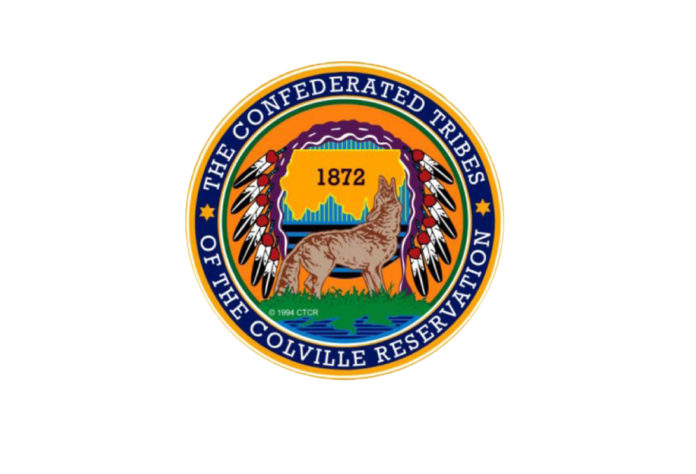 NESPELEM, WA – The Confederated Tribes of the Colville Reservation recently made a presentation to the Pasco Chamber of Commerce, describing the historic connections of the Colville Palus people to the area and outlining the tribes’ plans for economic development projects in Pasco.

“The Colville Confederated Tribes, which includes the Palus Tribe, has long sought to bring the Palus back to their traditional territory in Tri-Cities region,” Colville Business Council Chairman Rodney Cawston said. “We have been encouraged by the response of the local community to our efforts, and will continue to work cooperatively with city, county, regional and state officials to forward economic development projects in this area.”

In 2019 and 2020, the tribes purchased several parcels of land in Pasco, and currently are in the early stages of planning cultural awareness/educational programs and economic development projects for the property. The tribes have signed an agreement in principle with the Pasco City Council to work cooperatively on these efforts, and entered into a letter of intent with the Franklin County Planned Unit Development (PUD) to negotiate a lease of part of its land for a future PUD substation. The presentation, made at the request of the Pasco Chamber, focused on Palus historic and cultural ties to the region and outlined steps the tribes are taking to create economic development opportunities there.

“We are confident that our work will benefit both our tribal membership and the citizens of the Tri-Cities area, and look forward to continued cooperation in the future,” Cawston said.

Colin Hastings, Executive Director of the Pasco Chamber said, “We are pleased this line of communication has commenced to build an understanding of our respective interests as this project moves forward. Our area welcomes new and exciting economic development to better our community.”

Blanche Barajas, Mayor Pro-Tem for the City of Pasco, said “The City of Pasco looks forward to continued participation with the Colville Tribes to support the important cultural and economic development that will benefit both of our communities.”

The tribes’ presentation, conducted via Zoom between Colville Business Council Chambers and the Pasco Chamber of Commerce, included several PowerPoint slides and narration by Cody Desautel, the tribes’ Natural Resources Director. During a Q & A session afterwards, Desautel explained the process of a fee-to-trust transfer, explaining that this could take from two to five years to complete for the parcels the tribes own in Pasco. He estimated that the gaming enterprise would employ a substantial number of workers, depending on the size of the gaming market in the region at that time.

Executive Director Francis Somday said it’s possible that some economic development projects, such as a convenience store/fuel station, would start before casino construction, as parcels are moved into trust status. He said the tribes would likely open retail space on the property for local businesses that would like to locate there. Somday encouraged the chamber members to consider providing support for the project as time goes along. “I can commit to you that the tribes will be an excellent business and government partner,” Somday said.

Chairman Cawston encouraged chamber members to work with the tribes on all matters of mutual interest. “We want to join with Pasco and other communities in the region,” Cawston said. “Together, we can form a powerful partnership.”

Cawston said that in the near future, the tribes will submit an application to become part of the chamber and provide chamber members with ongoing updates about the tribes’ efforts in Pasco. Colville also will establish and staff a Community Outreach Office on the property to provide information to area organizations and citizens.

“There is a lot of opportunity for us to work together here,” Cawston said. “I’m really excited about that.”