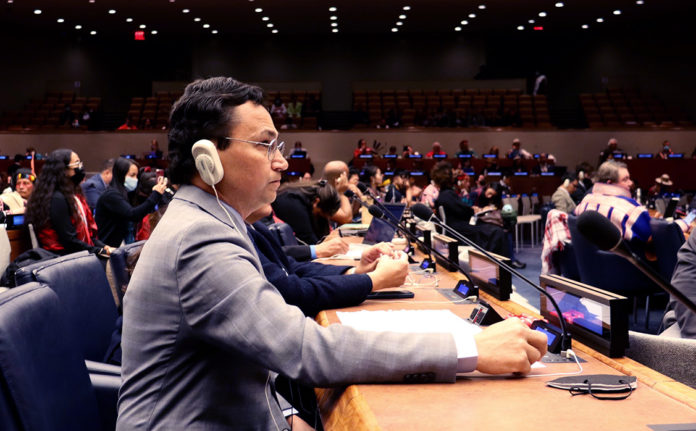 NEW YORK, NY – Cherokee Nation Principal Chief Chuck Hoskin Jr., spoke before the United Nations Permanent Forum on Indigenous Issues (UNPFII) this week, advocating for the preservation of Indigenous languages including Cherokee and other languages across the globe.

UNPFII is a high-level advisory body to the UN Economic and Social Council and was established in 2000. The UNPFII 21st Session took place at the United Nations Headquarters in New York and included dialogue on the International Decade of Indigenous Languages, Indigenous business, autonomy and human rights.

Chief Hoskin spoke on the ongoing work in the Cherokee Nation centered on language perpetuation and importance of saving Indigenous Languages.

“The Cherokee language is what makes us unique as a people,” said Chief Hoskin in his testimony. “It’s the chain that links us to our past, and it’s what binds us together and links us to our future. The Cherokee Nation is building a new language center that will house 14 unique programs developed to perpetuate our Cherokee language. When we are successful in our efforts over the course of the next decade, we will do a great deal to restore the languages of Indigenous peoples.”

The Cherokee Nation, under Chief Hoskin’s administration, has dedicated $16 million per year for Cherokee language programs. The tribe has a more than $18 million Durbin Feeling Language Center now under construction that will house the tribe’s language programs under one roof. The tribe has also earmarked millions for its new Cherokee Speaker services program and recently announced $4 million to build more Cherokee Speaking Villages to house first language speakers together, throughout the Cherokee Nation Reservation.

“Our approach to language preservation is increasingly holistic,” said Chief Hoskin. “Our youngest learners attend a Cherokee Immersion School. Our adult learners dedicate two years of their lives in the Cherokee Language Master Apprentice Program. We are creating opportunities for second language speakers to earn a living speaking the language. We are not only learning the language from our elders, we are helping them lead lives of dignity by improving their quality of life. We are building language villages where the language is spoken by families organically. We are increasing our investment in all of these efforts. Our strategies are working.”

The UN Permanent Forum held its meeting April 25 and meetings continue through May 6.

The Forum’s mission is to provide expert advice and recommendations on indigenous issues to the Council as well as to programs, funds and agencies to the United Nations. According to the UN, the Forum raises awareness and promotes the integration and coordination of activities on indigenous issues within the UN system. It also promotes the full provisions of the UN Declaration on the Rights of Indigenous Peoples. The 21st session deliberations will help with the Global Action Plan by States and Indigenous Peoples. All the meetings of the Forum, are streamed online at webtv.un.org.