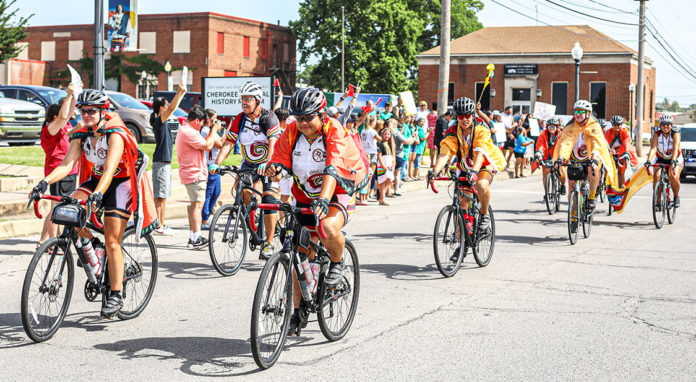 TAHLEQUAH, OK – Eleven Cherokee bicyclists who were part of the 2022 Remember the Removal Bike Ride finalized their 950-mile journey with a homecoming ceremony in the capital city of the Cherokee Nation.

During the trek, cyclists from the Cherokee Nation and Eastern Band of Cherokee Indians in North Carolina retraced the northern route of the Trail of Tears in honor of their ancestors who were forcefully removed from their homelands in the Southeast more than 180 years ago.

The cyclists began the memorial ride in New Echota, GA, on May 30 and pedaled through Georgia, Tennessee, Kentucky, Illinois, Missouri, Arkansas and Oklahoma before they were welcomed back at the Cherokee National Peace Pavilion in downtown Tahlequah.

“Two centuries ago, the Cherokee people were facing tremendous obstacles, erosion of our way of life, threats to our land and resources and things we held dear,” said Cherokee Nation Principal Chief Chuck Hoskin Jr. “But the Cherokee people did not simply go away. We resisted mightily, we joined together as a people, but ultimately, we were removed in a manner that was quite simply, brutal. Along the Trail of Tears, we lost a quarter of our population because the government of the United States thought the answer was to wipe us away. And yet, in the wake of that we came here and we rebuilt the great Cherokee democracy, our great institutions. We had a rebirth of the Cherokee people right here. I am convinced there’s nothing the Cherokee Nation can’t face down and overcome when we stand together united. Nothing we do embodies that more than the Remember the Removal ride. These cyclists witnessed the places our ancestors perished, the spot where they looked back one last time to their beloved homelands. I love the Remember the Removal ride and the stories of strength and growth by the riders. All of these riders represent the future of the Cherokee people and I believe they will take our great nation to heights we have never seen – not in spite of our obstacles, but because of them, and I could not be more proud.”

During their three-week journey, the team of cyclists visited historical spots that are significant to Cherokee history. These locations were emotional – sites like Blythe Ferry in Tennessee, which is the last piece of Cherokee homeland Cherokee ancestors stood on before beginning their forced trek to Indian Territory. Other stops included Mantle Rock in Kentucky, where Cherokee ancestors sought shelter as they waited for the Ohio River to thaw during a bitterly cold winter.

The ride is not an easy one, testing both the physical and mental capabilities of the cyclists. The team traveled through rain, sunshine, heat and hilly terrain – sometimes pedaling almost 60 miles a day.

“It’s been a really challenging thing, which we all knew it was going to be, but physically it wasn’t too bad,” said Cherokee Nation cyclist Madison Whitekiller. “It was more the mental and emotional toll that was rough. And getting homesick or not always knowing what lies ahead. That was more the tough part than anything. I feel like I’ve had an amazing journey on this. I think I’ve cried more than I ever have in my life, but I’ve also laughed more and celebrated more than I ever have. So it’s really been an amazing journey that I can’t believe is coming to an end.”

The ride’s inaugural event was held in 1984 to illustrate the hardships that the Cherokee people faced. It’s estimated that 16,000 Cherokees were removed from Alabama, Georgia, Tennessee and North Carolina in the spring of 1838. Nearly 4,000 of them died during the roundup, incarceration and removal.

“This ride has been very challenging and tiring,” said Cherokee Nation cyclist Kayce O’Field. “I don’t think I have been this physically challenged in this short of a time, but it’s been an amazing experience being able to see the sites we read about and actually being on the places our ancestors stood. That part took an emotional toll, and I feel like I am still processing that. But this ride has been a humbling and very gratifying experience.”

Cyclists were greeted in Tahlequah by hundreds of friends and family from the Cherokee Nation and Eastern Band of Cherokee Indians.