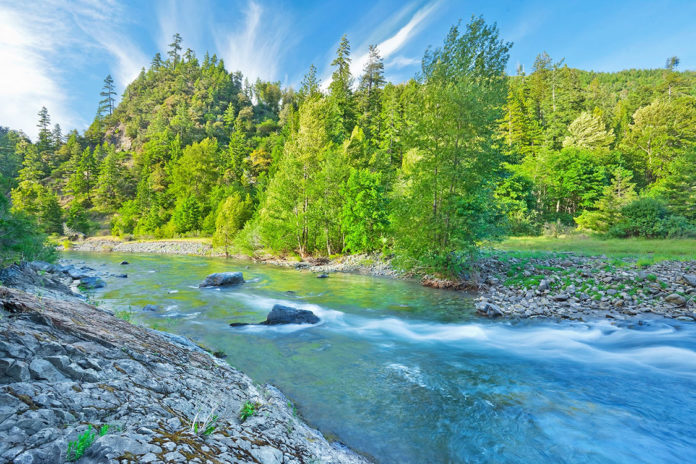 KLAMATH, CA – Congressman Jared Huffman (D-San Rafael) recently introduced the Yurok Lands Act (H.R.7581), a bill that seeks to revise the reservation boundary line and facilitate the transfer of more than one thousand acres of historically Yurok land back to the tribe.

“The Yurok Lands Act will help us reclaim our role as the steward of our land,” said Joseph L. James, the Chairman of the Yurok Tribe. “The bill will also strengthen our sovereignty as well as our ability to self-govern within our ancestral territory. I would like to thank Congressman Huffman for introducing this important piece of legislation. If passed, the bill will be a game-changer for the Yurok Tribe.”

The Yurok Lands Act is one part of the tribe’s larger plan to achieve two key objectives outlined in the Preamble of the Yurok Constitution. This foundational document was established to guide the tribe’s recovery from genocide, land theft and many other atrocities. Based on the tribe’s cultural values, the preamble places upon the Yurok Tribal Council a sacred responsibility to: “Reclaim the tribal land base within the Yurok Reservation and enlarge the Reservation boundaries to the maximum extent possible within the ancestral lands of our tribe and restore, enhance, and manage the tribal fishery, tribal water rights, tribal forests, and all other natural resources.”

At present, the tribe currently owns less than a quarter of its approximately 500,000-acre ancestral land base, which is currently occupied by timber companies, national and state parks and other land owners. During the last decade, the Yurok Tribe has recovered approximately 70,000 acres of former timber lands on and near the Yurok Reservation, which straddles the lower 44 miles of the Klamath River in Northern California. Most recently, the tribe regained 2,500 acres adjacent to Ke’-pel Creek, a key Klamath tributary. The acquisition created more than 34,000 acres of contiguous land under Yurok management. The Yurok Lands Act will redraw the reservation boundary to include recovered lands.

Within the reacquired lands, the tribe is employing an effective blend of traditional ecological knowledge and Western science to rebuild intricately interconnected forest and aquatic ecosystems that existed in Yurok Country for millennia. The tribe also set aside a 15,000-acre old growth forest and salmon sanctuary in the Blue Creek watershed. Last year, the tribe launched the Yurok Tribe Construction Corporation, in large part, to accelerate the restoration of tribal lands. Together, the corporation and the Yurok Fisheries Department design and implement large-scale projects to improve fish and wildlife habitat. The tribe also preforms forest thinning and selective harvest to minimize the fire threat. It will require many decades of hard work to return the landscape to the pristine state it was in prior to the arrival of European “settlers” in Yurok Country.

Before European contact, the Yurok Tribe managed the landscape to maintain optimal conditions for all native species. The carefully cultivated environment sustained more than 70 Yurok villages for many thousands of years, until California’s Gold Rush and the clear-cut logging era that followed. During this difficult time period, the state, with support from the U.S. government, inflicted a genocide against Native American people, including the Yurok Tribe, to clear the way for industry. Between the mid-1800’s and early 1900’s, extractive interests in California amassed a tremendous amount of wealth through the often-illegal and unregulated exploitation of natural resources on tribal lands. Even though a century has passed, the damage done by these industries continues to threaten the environment today. Massive mine tailings, salmon-spawning streams buried in sediment and unhealthy, fire-prone forests can be found throughout the tribe’s territory. The Yurok Tribe is working hard to fix these issues and bring the region’s biologically diverse ecology back into balance.

“The mental, physical and spiritual health of our people is inextricably linked to the landscape,” said Frankie Myers, the Yurok Tribe’s Vice Chairman. “By healing the land, we are healing ourselves. The loss of our original land base and the destruction of our homeland are injustices that we have had to endure for 150 years, but now we are turning the page. We are recovering our land and developing an economy that revolves around the restoration of the environment. If passed, the Yurok Lands Act will move us closer to making this long-term goal a reality.”